Arguing with TERFs over the internet is a vital part of transactivism, almost as important as silencing TERFs in person, vandalizing and shutting down their unsafe spaces, and disrupting their meetings. However it can be exhausting, as TERF after TERF refuses to accept that she is nothing but a worthless bigot who needs recant her hateful crimethink, and sometimes it’s hard to keep on finding the spoons for it. So, listed below are some handy, fail safe, multi purpose argumentative approaches that should silence any TERF in her tracks: 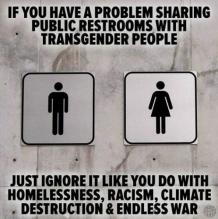 This is a terrific comeback, and there are many benefits to it. Any silent lurkers will assume that the TERF said something racist elsewhere and will immediately hate her. By associating her transphobia with the systematic oppression and borderline genocide waged against indigenous people’s over millennia, it will make transphobia seem like an equally important issue, and everyone will be afraid to question you further. If the TERF tries to counter by saying how on Earth did you come to that conclusion, explain that if she believes one bad thing (that trans women aren’t women) then that means she must support all other bad things too. Also, white supremacist sounds a bit like white feminist, so it’s only a small step between accusing a feminist you don’t like of being the latter and denouncing her as being the former.

This is a time honoured classic, that has been used to successfully shut down TERFs before people even knew what a central issue trans rights were to the cause of feminism. Admittedly, this argument is borrowing slightly from the manosphere play book, but the fact is if men have been debunking women’s arguments for years by pointing out that those women are unattractive, it must be because it’s a damned effective method, right? If you like you can put a trans friendly twist on it, by suggesting they’re just jealous because trans women have better legs, hair, make up etc,

This is an excellent way to shut down a TERF while making yourself look smart. Back it up by scornfully asking if they know how to use Google. Then the TERF has to go and research your argument for you, instead of making you expend the unnecessary energy of backing up your assertions with facts. If they persist in sealioning you, and push you to provide data for your statistics, always be sure to have some lengthy, borderline incomprehensible study to link to, that will leave the TERF so bemused that by the time she’s made sense of it, you’ll have had time to block her on social media and report her account for hate speech.

4. Call them a Fake Goth

This is a fairly new one, but it’s gaining traction. Originally it applied to members of the goth community not considered authentic. However, since the recent invasion of Olympia, Washington by arch TERF Cathy Brennan captured on video here, the term now applies to TERFs. Its beauty is in its ambiguity. Are we criticizing their appearance (see 2.)? Their ideas? This comeback is guaranteed to leave even stubbornest TERF exclaiming “What?”

Again, this is borrowing from the online misogynist’s playbook, but you have to remember that TERFs aren’t proper women (or people for that matter), so it’s fine to call them gendered slurs, threaten them with sexual violence, or send them memes like this one:

Make this all about you, and your own personal suffering, rather than let them derail the conversation by talking about the more general consequences of making sex and gender solely a matter of self identification. DO NOT let them start citing examples of incidents where (undoubtedly fake) trans women have behaved in a negative manner. If you don’t

have any personal experience of assault, harassment or suicidal thoughts; or if you’re cisgendered, in which case you’ll be far too privileged to have ever suffered anything, bring up the plight of suicidal children with gender dysphoria. No one can disagree with gender dysphoric children being administered off label hormone blockers, followed by a life time of hormone injections; not unless they want all those children to commit SUICIDE! No one will admit to wanting to kill children, will they*? Also cite unverified statistics about trans women being murdered every 8 minutes. Admittedly this also sort of borrows from the manosphere playbook, effectively threatening suicide if they won’t capitulate and all; but hell, all’s fair in love and war, right?

When all other avenues have been exhausted, when you’ve made the most emotive argument you can think of, when you’ve accused them of causing violence with their refusal not to condemn the wearing of pink hats, and you just can’t find any more spoons tucked behind the couch, you can always post a series of memes. If you don’t already have a ready supply of trans supportive memes, they are very simple to make:

First find a random image off the internet

Second, add some sassy truth bomb that no one can fault the logic of:

and voila, the argument is won. It helps if you can post five or six of these in succession.

The above pat responses are sure to silence any TERF who dares to voice her opinion on a publicly accessible forum, and until such time as we can persuade all social media platforms to permaban anyone who utters transphobic hate speech, it is with arguments like these that we can maintain our positive bellyfeels.

*If anyone tries to assert that repeatedly talking about vulnerable young people being suicidal is actually harmful and may encourage children to self harm, just put your fingers in your ears and scream ‘LA LA LA!’ while closing your browser.